Igbo Nation, The Biafran Question And Restructuring: The Way Forward

45 years after the civil war, the Buhari presidency in 2015 returned Nigeria to full-blown marginalisation and the vexed politics of exclusion. In this, the Southeast was worst hit, owing mainly to the presidents well-known insensitivity to Nigeria’s fragile diversity and his disregard for the principles of democratic practice. In all tiers of government, the Igbo faced an orchestrated policy of exclusion, pursued and encouraged by the president himself.

For a nation that has been through an avoidable civil war, decades of continuing ethnoreligious divisions and an ongoing Boko Haram/herdsmen terrorist insurgency, Buhari’s blatant sectionalism, nepotism and insensitivity to Nigeria’s diversity dealt a further blow to the long-elusive quest for national unity and nationhood. The Igbo nation has disproportionately borne the brunt of these ill-advised policies and the overall failure of the Nigerian state. Yet while bad leadership has continued to consign Nigeria to failure politically and economically, the Igbo nation need not fail along with Nigeria. If anything, the long betrayed ideal for development; driven primarily by the nation’s contradictions; suspicion/distrust/conflicts and the destructive policies of marginalisation in place of policies of national development has made it obvious that aspirations for regional development can only be actualised through a self-driven effort under the auspices of an integrated private sector-led regional development platform, created specifically for that purpose.

As a distinct people; we have more population than Singapore, United Arab Emirates, Qatar, Taiwan, Belgium, Sweden, Netherlands, Portugal, Denmark, Ireland, Israel, Switzerland, Greece amongst others as well as 80 per cent of African nations. We are thus a nation in our own right and accordingly have the wherewithal to mobilise our population; human and material, at home and in the Diaspora to create a separate, ingenious and audacious part for developing the homeland through a public/private/Diaspora partnership. While we may not have much control over Nigeria’s decadent and un-progressive politics, we can to a large extent control our regional economy and create a vortex of self-sustaining economic development driven primarily by the private sector.

We hereby for the umpteenth time, call on the governors of the Southeast region, captains of industry, Diaspora leaders, Banks and other private investors to come together and create a regional investment corporation dedicated to the development of the homeland through investments in critical capacity building “generative” infrastructure such as tolled super-highways (10-12 lanes), real estate, tourism, special industrial parks amongst others. 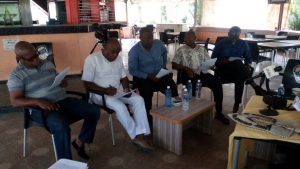 In a globalising world, we believe that such a regional platform, benefitting from the economies of scale, partnership with the private sector and the Diaspora can better aggregate resources for capital intensive infrastructure and projects across the region within the framework of 5-10 year benchmarked development plan.

In recent years Nigeria has been flush with self-determination groups. In the North, there is the Boko Haram terrorist war that has killed thousands of Nigerians in their struggle for a pure and undiluted Islamic state. In the East there is IPOB amongst others, In the Niger Delta there is the AVENGERS and in the West there is OPC. These groups have been given life by decades of misrule, growing ethnoreligious contradictions, injustice, structural/systemic deficiencies and the overall failure of the Nigerian state. In engaging these groups, the Nigerian state has exclusively chosen violence rather than dialogue and wide-ranging reforms/restructuring. Regrettably, the government has chosen this option of violent clampdown even for non-violent groups such as IPOB who only exercised their constitutional rights to free speech and assembly. 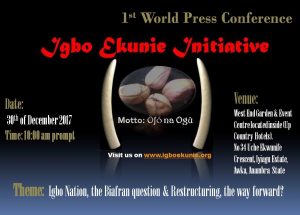 As Martin Luther King once said, “the right to dissent and or to agitate for a right is what makes a nation great.” Nigeria can neither prosper nor become a great nation except the right to dissent and peacefully agitate for a right is acknowledged, respected and dialogue is championed as the ultimate medium for dealing with grievances. Nigeria cannot claim to be a democracy and yet violently suppress free speech and differences of opinion that underpins the very essence and practice of democracy.

In that regards, we submit that IPOB in particular is and remains a non-violent organisation that only expressed dissent and opinions within the constitutional provisions for freedom of speech and assembly. No true democracy or sane society can use violence to meet the dissent or peaceful aspirations of such a group. The jailing and killing of IPOB members remain, therefore, a gross and criminal breach of the very constitution that enabled the Buhari administration.

There can be no doubt that Nigeria remains in the words of ChiefObafemi Awolowo “a mere geographical expression” in search of national unity and nationhood. In the process, it is inevitable that groups and regions, driven by misrule, injustice, marginalization and failure will seek self-determination one way or the other. In such circumstances, the duty of the state is not to kill or jail those who seek a divorce from the failing and dysfunctional union, especially when they do so non violently, but to engage them in dialogue in view of addressing their grievances and finding pathways to harmony and true nationhood.

We, therefore, call on President Buhari, governors of the Southeast, Ohanaeze Ndigbo, opinion leaders and human rights groups to engage IPOB and all other self-determination groups in fruitful dialogue that will address their grievances and permanently end agitations across Nigeria. In the same vein, we call for the immediate withdrawal of all charges against IPOB members and the unconditional release of all their detained members. In a democratic and heterogeneous state, dialogue should be championed above repression as that is the only way to achieve lasting peace.

Restructuring As The Way Forward:

Owing to Nigeria’s perpetual crisis of nationhood and the increasing proliferation of self-determination groups, the call for restructuring has continued to grow louder. By now, it should be obvious that the status quo is unsustainable and attempting to retain it, is at best suicidal.

We submit, that the time has come for a fundamental restructuring of the Nigerian state to a structure and system that provides optimal governance that meets the needs of the populace and more importantly allows each region develop at their own pace.

We note, that the fundamentals of restructuring suffer no conflict, as all proponents virtually agree that more control/autonomy in all facets should be given to the states and or regions as the case may be, that government systems should be modified/streamlined for more effective governance, that there should be the rotation of power for purposes of nation-building, that corruption should be eliminated, that security should be enhanced and that development and welfare of the citizenry should be the clear and unambiguous goal of government at all levels.

While the fundamentals across the board are largely the same, the modus operandi has remained the only contention. Yet we believe that the 1963 constitution, Aburi Accord, the Abacha constitutional conference and the 2014 National Conference report already provides a rich resource base of proposals from which a working document for restructuring can be obtained by any sincere government and given life through practical implementation.

In closing, we submit that Nigeria is not a natural nation, nor was it ever meant to be. Nigeria was conceived by Sir TaubmanGoldie, a British trader whose only interest was the exploitation of resources/ maximisation of material gain. The British colonial authority continued from where Sir Goldie stopped ultimately to maximise their colonial interests in regards to natural resources and other such material gains.

The post-colonial administration, therefore, inherited a nation that never was at independence. That unresolved contradiction has arrested the nation’s development and continued to increasingly challenge its very existence. We believe, therefore, that except and unless Nigerians engage in dialogue and the nation is restructured to meet the aspirations of her various peoples/nations, she is unlikely to survive the 21st century.

A word, as they say, should be enough for the wise!