We the Igbo Ekunie Initiative, IEI, comprising individuals in Nigeria and the Diaspora; are alarmed at the mounting heaps of refuse in Douglas road and other parts of Owerri  metropolis.  Not only does this constitute an eyesore, it also has grave health implications for residents of the city. We note that under the stewardship of Dr Sam Mbakwe, Owerri was voted the cleanest city in Nigeria. It’s therefore a failing of monumental proportions on the part of Governor Rochas Okorocha that a city noted for its cleanliness has under his watch become one of the filthiest cities in Nigeria; more so under a party and administration that promised change.

Making the rounds in the media is the narrative that Owerri filth was deliberately allowed to build up because the residents didn’t vote for Governor Okorocha. If such narratives are true, it can only mean that Governor  Okorocha does not understand the meaning of democracy;  has violated the oath of office he swore to  and by implication is unfit to hold office as governor of Imo state. Also of  note is the fact that mounting heaps of refuse on the streets of Owerri  and elsewhere come on the heels of unpaid salaries and pensions in spite of being advanced a bailout by the federal government and very poor state of roads and other critical infrastructure across the state. We submit that there is no justification for Governor Okorocha and his cabinet members to be availed of their own salaries in addition to wasteful privileges while the ordinary workers and pensioners in Imo state are unconscionably owed salaries/pensions. 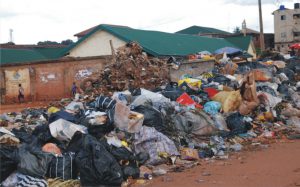 There is also no justification for the abysmal failure of governance in Imo state, when it has 27 local governments (the highest in the Southeast) all of which receive federal allocations in addition to being an oil producing state with further special allocations accruing. We recall in 2011 when Governor Okorocha ran for governor under the auspices of APGA against an incumbent governor who had the advantage of being from the ruling party. The masses stood behind him, risked life and limb in public stand-ins and protests to protect their votes. In the end, against overwhelming odds Okorocha became victorious on a groundswell of public support and mass action; making history as one of the first to defeat an incumbent governor in the fourth republic.

Ushered into power with a rare people’s mandate and by so doing, inadvertently became the poster boy for Nigeria’s democracy. Yet, years later Governor Okorocha seems to be bent on self-immolation. Increasingly gone astray, Okorocha has evidently abandoned his people’s mandate and joined the bandwagon of anti-people governance, reflected in unpaid salaries/pensions, heaps of refuse in Owerri the Imo state capital and elsewhere, and poor infrastructure across the state. We submit that this represents a monumental betrayal of the very essence of democracy and ultimately the sacrifices, goodwill and mass action that brought him to power.  Owerri as well as Imo state deserves better. Once the cleanest city in Nigeria, Owerri must be returned to its pristine cleanliness while the state must look beyond Nigeria and strive to be a global model.  For Governor Okorocha who has not hidden his ambition to lead Nigeria, it’s self-defeatist to fail at the governance of one state out of 36 and still somehow hope to make the argument to lead Nigeria.

At best, Okorocha should make Owerri and Imo state a rare model of development and good governance as a pointer to future aspirations. This we believe is still achievable, if he resolutely pursues it.