The attention of Igbo Ekunie Initiative, a coalition of professionals in Nigeria and the Diaspora has been drawn to the cowardly, primitive and illegal arrest of hundreds of Igbo women in Owerri Imo state by the Nigerian Police and security forces. These innocent and unarmed women were within their rights under the Nigerian constitution, engaging in a peaceful demonstration and protest over the continued disappearance of Nnamdi Kanu.

We strongly and unequivocally condemn the arrest and detention of these women by the Nigerian security forces in Owerri led by the Imo state commissioner of Police Dasuki and hereby call for their immediate and unconditional release.

We are supposed to be in a practicing democracy and we cannot understand why the magistrate Mrs S.K. Durumba before whom the arrested women were charged in Owerri would refuse to discharge and acquit the women or at least grant them bail as prescribed under the law especially as she made it clear in her ruling that her court had no jurisdiction to entertain the suit brought before her.

We submit that the brazen parochialism of the Nigerian security forces which are ever eager to arrest and detain innocent people from the South East part of Nigeria but opts to protects, aids and abets terrorist herdsmen from the Northern part of the country is not only a fundamental breach of constitutional responsibility but also capable of igniting an existential  crisis of unfathomable consequences in an already fragile nation under the current APC administration.

We find it strange that an organization that goes to sleep when hundreds and even thousands are massacred across Nigeria by Fulani herdsmen can hurriedly embark on arresting and assaulting harmless and unarmed Igbo mothers that are protesting peacefully in Owerri Imo state, over the disappearance of Nnamdi Kanu, a man who could no longer be seen or heard from ever since the Military invasion of his village home in Umuahia Abia State.

We are persuaded to believe that the Nigerian security organizations comprising of the Police and the Armed forces have become sectarian organizations that serve the interests of the feudal Fulani in Buhari’s historically sectional administration.

Whereas security agencies are constitutionally required to  serve all citizens and residents equally in their onerous duty to protect life and property, the incipient bastardisation of government institutions  has led to the unprecedented situation where the army, DSS and police now serve only the narrow tribal interests of Buhari and Fulani herdsmen  whom international organizations such as the United Nations and the Global terrorism index (GTI) have since classified as the 4th deadliest terrorist group in the world; possibly aligned with Al Qaeda and ISIS.

The audacity, organisation, coordination and public wielding of AK47 sub-machine guns and other sophisticated assault weapons by Fulani herdsmen indicates the herdsmen are getting support and aid not only from the Nigerian government and security services but possibly also from Al Qaeda and ISIS,  which portends grave danger for Nigeria, the  African continent and beyond. 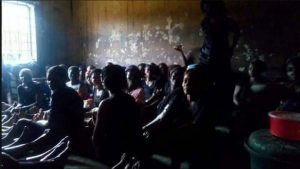 The implication of such dangerous collusion with terrorists on ethno-religious grounds is that the federal government is working against international conventions and laws as it concerns the prevention of terrorism and the violation of human rights.

While it is regrettable that no lessons were learnt from the Nigeria-Biafra war that was occasioned principally by tribal divisions within the army, we warn that the relapse to sectionalism/tribalism by Nigerian security services is a dangerous and sure recipe for doom.

Finally we condemn again in the strongest possible way the ill-advised arrest, illegal detention and barbaric torture of hundreds of Igbo women who are now illegally held in military custody by Nigerian soldiers and police under the most appalling conditions and we hereby reiterate our call for their immediate and unconditional release with maximum compensation in monetary terms paid to them by the Nigerian authorities.