The attention of Igbo Ekunie Initiative (IEI), comprising professionals in Nigeria and the Diaspora has been drawn to declaration by a so-called coalition of Arewa youths who in reaction to the successful/peaceful sit at home organised by IPOB/MASSOB in memory of those who lost their lives in the Nigeria-Biafra war gave Igbos/Southerners 3 months to quit the North.

Having carefully reviewed the declaration, we have come to the conclusion that the declaration was made by a sponsored group of atavistic, criminal, primitive, lazy and intransigent hordes with primary intent to steal property, suppress the legitimate grievances of the pro-Biafran groups and their inherent right to self-determination; to suppress all forms of opposition to the failed system and with it any possibility of restructuring the nation so as to maintain the decadent status quo.

We note that these hypocritical, shameless, criminal and fascist core Northern groups have been silent or defensive as Fulani herdsmen provocatively invaded other people’s land and carried out mass killings of thousands of Nigerians in the Middle Belt and Southern parts of the nation.  We note that these same fascist core Northern groups actively supported and still support Boko Haram terrorists as they attacked and killed thousands of Nigerians. We note that these fascist groups in 2000 repudiated the Nigerian constitution and treasonably declared Sharia law across 12 Northern states thereby effectively and technically removing themselves from the rest of the federation.

We also note that hundreds of thousands of innocent Nigerians/Christians have been slaughtered in the  North for 7 decades since 1945 without any consequence and without any of these fascist core Northern groups ever condemning such barbaric and criminal acts that has kept the nation dangerously divided.

Whereas Nnamdi Kanu and others were arrested and prosecuted, while some were killed merely for demanding self-determination, the fascists who made the Kaduna declaration are yet to be arrested despite the Northern dominated security agencies announcing their intent to do so. No one is fooled. 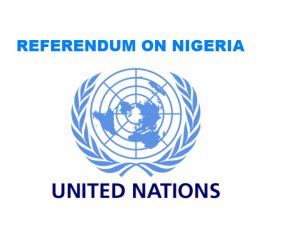 We are therefore of the view that the “core Sharia North” remains unwilling to negotiate/dialogue with and or partner with other Nigerian nationalities to restructure the nation in such a way as to address all grievances, create a progressive/sustainable production driven federal structure and birth a just, de-tribalized, harmonious, functional and prosperous nation. The core North remains stuck in its atavistic determination to keep the nation the way with it is, with the failed, parasitic, unjust, unequal, lawless, Apartheid, un-progressive, dysfunctional, violent, murderous and collapsing system.

That the “core Sharia North” can in spite of all the evidence of failure, division, violence/terrorism and collapse still insist on maintaining such a failed system/status quo is  by now largely demonstrative of the fact that they are in mentality no different from  Boko Haram  and thus cannot  be negotiated with.

In light of all of the above, it’s self-evident that while the rest of Nigeria/other Nigerian nationalities are willing to restructure and move forward;  the “core Sharia north” is determined to keep the failed status quo. Yet there can never be peace nor progress with the present status quo. The inalienable rights of all peoples and or indigenous peoples to self-determination is recognized in the United Nations charter and in the African Union Charter on human and people’s rights both of which Nigeria is a signatory to.

All ethnic nationalities in Nigeria are therefore within their rights under the instruments of international law to exercise self-determination when they so choose. In furtherance of this right and in view of the Kaduna declaration and the evident “core North’s” adamant intent to maintain the status quo against the wishes of the rest of the country that wish to have a restructured nation; we declare as follows:

That having become overwhelmingly evident beyond any doubt that the core North is unwilling to enter any dialogue/negotiation with the rest of the country to restructure the nation, that the rest of the nation willing to restructure/negotiate  should immediately opt for a United Nations-supervised referendum on self-determination to separate from the core north and thereafter to create a  negotiated, restructured and progressive federal union/nation of 3 regions/zones amongst all willing parties along the “Southern Nigeria Protectorate” borders of the pre-1914 arbitrary amalgamation.

That the Middle Belt if they so choose and through a referendum can join the federal union bringing it to a federal union of 4 regions/zones.

That while we recognize that ownership of property transcends citizenship and falls under the scope of international statutes and laws, we, however, encourage all Igbos/Southern Nigerians/Christians to cease all or any investments and those who are able to, to dispose of their properties where possible and quit the “core North”. In the same vein, we encourage those who are not able to leave to remain vigilant and those unable to dispose of their property to carefully secure all documents related to their acquired properties as such documents will be required when and if it becomes necessary to claim such properties through diplomatic, military or international legal channels.

That the names and identities of all those behind the Kaduna declaration have been compiled for submission to the International Criminal Court (ICC) in the Hague for inciting violence and to ensure that they will this time not escape justice if any violence results from their pronouncements.

That as a way of promoting orderly transition after a successful referendum, that all civil servants, military, police and other personnel presently serving the Nigerian state from affected/separating Southern regions will be integrated and will retain their service years, ranks and benefits  in the new civil and security services that will replace the former. However, there will be retraining, indoctrination and be upping of competence to ensure that the needs of the new “progressive republic” are effectively served.

That all self-determination groups within the Southern territories i.e. OPC, IPOB, MASSOB, Oduduwa, MEND, Avengers, Rondel,  Lower Niger Congress (LNC) etc should unite and work for a collective referendum within all southern territories and or regions willing to restructure in the first instance.

That all Southern regional leaders united in the common and supreme purpose to achieve a progressive, just and negotiated functional federal union where all citizens will be guaranteed equality, where the preciousness of human life will be sacrosanct and all regions can develop at their own pace.

That cognisant of the fact that the core North is unwilling to accept or surrender to such a negotiated and restructured union and that the nation can neither know peace nor progress with such a recalcitrant, atavistic north, should take it as a 2nd and final independence and thus to collectively work for a UN-supervised referendum across the territories of Southern Nigeria Protectorate on pre-1914 arbitrary amalgamation borders.

That its time has divinely come and that this should be done with full knowledge of the fact, that all through history men and women of great ideas have pursued the freedom and prosperity of their peoples from those who sought to colonise/oppress and deny people their inalienable right to self-determination, equality and or to develop at their own pace.

Finally, we urge all our citizens in the Diaspora, including those serving in the American Marines/Army and other such security services, scientists, technocrats and elected MP’S in the British parliament to in earnest begin massive mobilisation as their input; financial, technical, political, diplomatic, military and otherwise maybe be required in due course and at short notice as we finally face down and seek freedom from the great evils of internal colonialism.